Picturesquely situated in a bay surrounded by mountains and bounded by two rivers, Malaga with its two thousand-eight hundred years of history is one of the oldest cities in Europe.

Malaga is not only the capital of the Costa del Sol, a destination known throughout the world where the climate, the sea, beaches and golf courses represent an irresistible attraction for national and international tourists. If you are planning to come in Malaga, you cannot miss the city.

The centre of Malaga is a place where you can spend hours and return to visit without ever getting bored; there’s so much to see that it’s impossible to even enumerate. Malaga is rich in culture, modernity and historical monuments. It’s a cosmopolitan city with a history that dates back to the Phoenician times when it was founded, and later on passed onto the Greeks, Romans and Arabs, who left us part of their culture and constructions. Malaga was finally conquered by the Catholic Kings in 1487, leaving us an incomplete cathedral due to the lack of funds back then, known as ‘La Manquita’.

Of its even further past we must mention several monuments to visit, highlighting the Alcazaba Arabic Castle and the Gibralfaro castle with beautiful gardens located by the coast.
Apart from the above mentioned, Malaga is the city of Pablo Picasso’s birthplace, and the square where he used to play as a child still exists today, as well as his house which is now a museum that you can visit during your stay in Malaga.

Malaga has the second biggest port in Spain, recently modernised and is now also a great place to spend a day’s shopping. 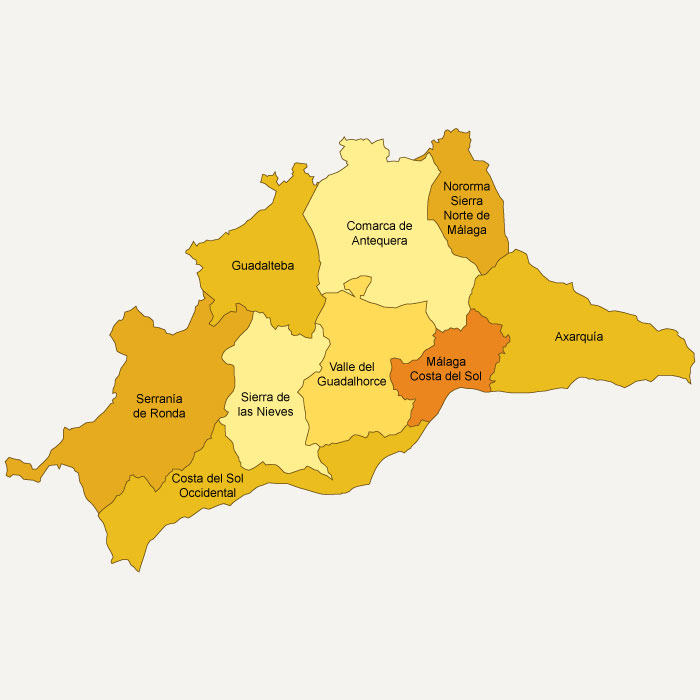 The province of Málaga has over 160 kilometres of coastline. A total of 14 districts are located directly on the Mediterranean Sea. You can find secluded enclaves set in unspoilt nature, as well as more established tourist places. The beaches in both the eastern and the western part of the province are so attractive they have made the Costa del Sol one of the top international destinations.

Also a must is the landscape inland, with more than 15 officially protected areas classified as nature reserves, natural spaces or natural landmarks. Places that may be either in the depths of the Mediterranean or on the highest peaks. Magical forests and rivers where you can still find foxes, golden eagles and Spanish ibex. You cannot miss a trekking in some Natural Parks such as Torcal de Antequera or Sierra de las Nieves.

You will find endless gastronomic delights on the coast of Malaga. Small fish (anchovies, red mullet, mackerel, squid and baby squid) served fried are the hallmark dish in a cuisine which is characterised by its simple presentation and its exquisite tastes. The prawns from the bay, the clams and the boiled or grilled Dublin Bay prawns all have a special flavour.

In the interior of the province you will find delicious cured meats and hearty fare: kid with garlic, fried kid, hare… There are countless recipes for gazpacho in Malaga: ajoblanco (with garlic and almonds), porra antequerana, gazpachuelo (with fish)… The locally-produced wines, made from raisins and muscatel grapes, and the Pedro Ximénez sweet wine are internationally renowned.
A whole universe of flavours to be enjoyed by visitors to this ancient land.

How to get here

Visit Renfe website to check trains to arrive in Málaga.

Malaga-Costa del Sol airport receives flights from USA, Asia and from almost all the European capitals.

Great access by road from Granada, Seville and Cordoba, that will make it easier if you decide to hire a car, find a blablacar, or take the bus.